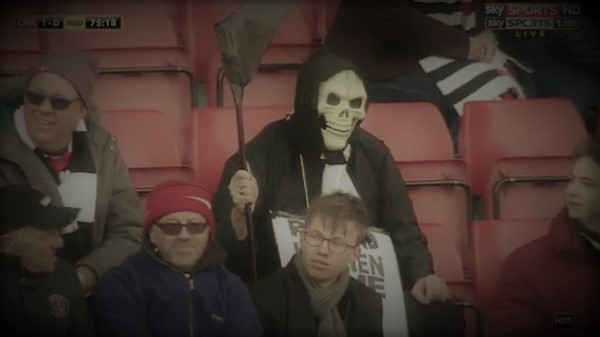 March 2016 saw Charlton fans’ protests against owner Roland Duchatelet reach a peak before, during and after the Sky Sports-televised match at The Valley v Middlesbrough. The game was preceded by a fans’ march behind a coffin in which the soul of Charlton was laid to rest. Supporters launched a barrage of beach balls onto the pitch, interrupting play. And organisers CARD had called for a walkout in the 74th minute ahead of a post-match demonstration.

The TV camera zoomed in on the North Upper to show supporters straggling their way to the exits just after the 74th minute. It then lingered for a moment on what, for me, has become the abiding image on a day of so many: the Grim Reaper, still sat in his seat, furtively glancing around. You could clearly sense the dilemma – was it the moment to up and follow fellow fans or stay put and cheer on the team to an unlikely victory?

From my sofa – no, not that bizarre one by the corner flag, an incongruous example of the regime’s ‘matchday experience’ – far away in Scotland I felt total empathy with this sinister black and white figure. If I’d managed the trip to London for this game, instead of the Reading humdinger a couple of weeks earlier, I’d be there now, near the front of the North Upper too. Would I get up and walk out with Charlton leading 1-0? Was joining the overall protest about the way my beloved club was being run into the ground worth more than cheering on the team in today’s remaining twenty minutes of need?

I’ve never ever left a match early – Dad ingrained that in me when he regaled the tale of how he nearly headed off once when Charlton were a man down and 1-5 down with half an hour to go. That was against Huddersfield, back in the Fifties and every Addick knows the outcome: a 7-6 victory that still defies the history books with its improbability. In our days together attending The Valley (and Selhurst and Upton Park and various away grounds), even if there were some pressing post-match engagement, at worst we might make our way to the top of the stairs in injury time, ready to make a sharp exit on the full-time whistle. Watching the football to the bitter or occasionally sweet end is the reason we go, isn’t it?

Yet Dad was also an energetic shop steward in his prime, organising and rallying the troops against any perceived injustice. He fought for the right to strike, the right to protest, the right to challenge bad management. Don’t get me wrong – he was not a revolutionary – his union was on the more moderate side of the movement and he much preferred negotiation and communication to direct action. Dad passed away a few years ago but I know he’d have been behind the current CARD-led protests in general. I don’t know for definite if he would have supported the walkout but he would have seriously considered it. If you have to make a personal sacrifice to join in – foregoing the pre-match pint on the concourse, breaking the habit of a football lifetime by not buying a programme or even turning your back and exiting when the team is winning – does that not hammer home your point all the more strongly? Sometimes gain only comes with pain.

Regardless of the decision I didn’t have to make, on Sunday I felt extremely proud to be an Addick, albeit a distant one. With no need to prompt, Chris Powell turned up suitably attired for a funeral. The procession with the coffin was dignified and impactful. The minute’s silence, viewed via a jumpy online feed, sent shivers down my spine. I was almost crying with a mix of joy and sadness as beach-balls rained down and stopped play before it had barely started. The creativity and general good humour of the fans, whilst still getting across a powerful message, was positively embraced by the watching world. In the aftermath, we should be more united as a group of fans than ever. Let’s not detract from that by bickering about whether it was right to walk out or not. That was a difficult choice. If you don’t believe me, I dare you to ask the Grim Reaper.