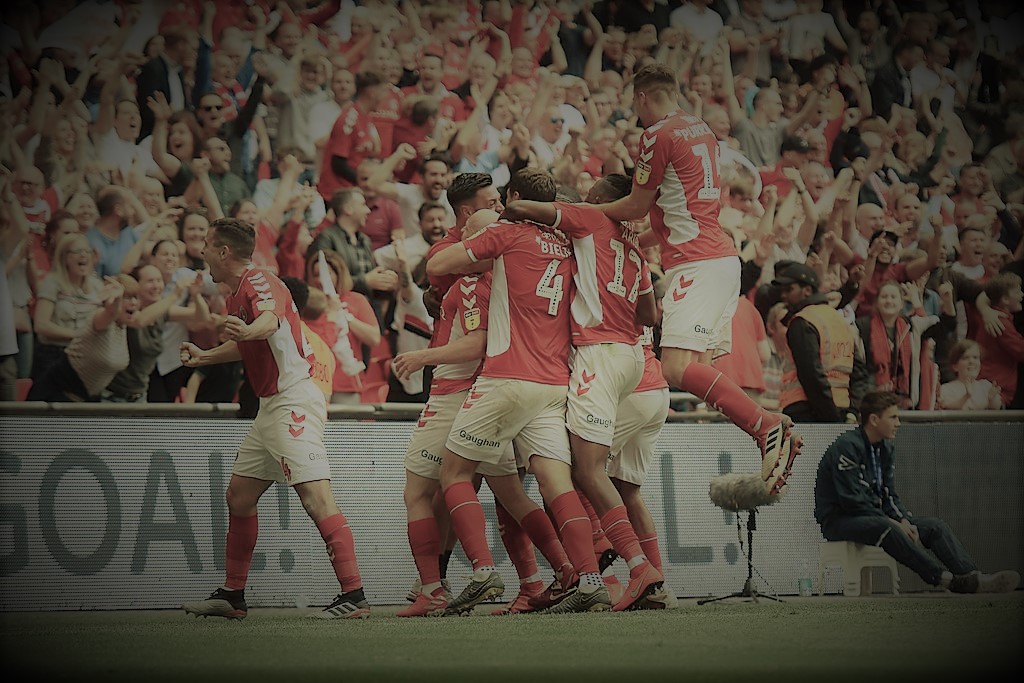 Reflecting on the sacking of Johnnie Jackson after 12 years at Charlton but just 40 games as manager. Written for www.castrust.org.

In truth it’s a long time since Johnnie, oh Johnnie Jackson ran down the wing for us. The closest he came in recent years was that ebullient celebration at Wembley 2019. He charged along the touchline to act as the climbing frame for a bunch of highly-excited red-shirted footballers, the elation that Charlton were seconds from a place in the Championship overwhelming us all.

Yet that rather quaint ditty in Jackson’s honour still rang around the Covered End as we clinched a last home victory of the season versus Shrewsbury. While some had been muttering about whether Jackson had the experience or tactical nous to build a squad for a promotion push next year, the general sentiment was to give him the time, the opportunity and the backing to do so, even after the 4-0 trouncing at Ipswich. As such, news of his sacking was the unexpected yin to the well-trailed yang of George Dobson’s coronation as Player of the Year.

Jackson was the Q&A guest at CAST’s AGM last November. He spoke warmly of his connection with Charlton – how he always felt he would end up here. His only top-flight goal was scored for Spurs at The Valley. He may not have come through the Academy ranks at Sparrows Lane but he is certainly ‘one of our own’. He arrived initially on loan from Notts County in February 2010, an emergency replacement for injured Grant Basey. Then he himself succumbed to the treatment table and was packed back to his parent club. Phil Parkinson signed him on for the following season. When novice manager Chris Powell undertook a major squad overhaul in summer 2011, Jackson was the only first team regular to survive. Indeed he thrived, taking on the captaincy and leading us through a record-breaking season. We got a real insight into his character and never-say-die attitude with his free-kick double securing maximum points in consecutive weeks versus Sheffield promotion rivals United and Wednesday.

In future seasons Jackson continued to throw heart and soul and knee slides into leading the Addicks to victory – that last gasp clincher v QPR is seared in our collective memory. He went above and beyond in his dedication – even acting as unpopular CEO Katrien Meire’s human shield at a feisty fans’ meeting, turning up a little late with his cup of tea to lighten the atmosphere.

Personally I’ll always remember the match versus Fulham at home in October 2015. We were 2-0 down but had just won a corner with about 80 minutes gone. Jacko emerged from the bench, running animatedly towards the area, pointing, shouting and screaming at the kick-taker to find his head. In an almost carbon copy of the QPR goal, he planted the ball right in the net. Jordan Cousins followed the skipper’s example with an injury-time addition. One of those draws that felt much more like a win – and a very clear example that when Jacko sets out to achieve, he gets the result.

On the Zoom AGM meeting he also claimed to be a better guitar player than Charlton supremo and would-be rock star Thomas Sandgaard. Maybe the latter didn’t get the joke. The past couple of weeks have been replete with quotes and interviews with both Jackson and Sandgaard on plans for the summer. Reading or listening back now, with the benefit of that wonderful thing called hindsight, it is obvious that the owner was not being whole-hearted in his backing for the manager, speaking of his own ideas regarding training methods and playing style.

I spoke to Jackson at the sponsors’ dinner briefly last week and the future of club captain Jason Pearce was clearly weighing on his mind. He compared it to the end of his own playing career and talked about the important role his then manager Karl Robinson took on in helping him understand that his legs had gone – OK, he didn’t quite put it like that but I got the gist. We now know that Jacko had to confirm to Pearce that he was not going to be offered another playing contract at CAFC. That was probably one of the last actions he undertook as manager of The Addicks. I don’t know the circumstances of how he conducted that discussion but I imagine there was empathy and gratitude for Pearce’s contribution.

Sandgaard flew back to the States after the Player of the Year do so did not break the news in person to Jackson that he was no longer wanted. That must leave a sour taste for a man who gave the best years of his playing career to this club and set out on the coaching and managerial ladder here. The owner has to make the hard decisions but I’d like to think that Charlton’s values mean we treat loyal club employees with respect, especially when they are being shown the door. Johnnie Jackson has graced our club for more than 12 years. He played over 250 games and scored 50 goals in the Addicks shirt. As manager he was in charge for 40 games, overseeing 19 wins.

I’m a bit of a one for football omens. As soon as the fixture list came out for season 2011/12, I spotted Carlisle away in late April. I had us odds-on for promotion – in my Charlton world, lightning does strike thrice. And it did. After the final match of this season, I was clinging to 13th as a springboard to promotion or at least the play-offs. I also had in mind that Charlton playing legends had the knack of leading us out of the third tier – Lee Bowyer in 2019 and Chris Powell in 2012. For those long in the tooth, we can even follow the lineage back to Mike Bailey in 1980. I liked to think it was written in the stars for JJ too. The owner has decided it’s not to be.

The football is now very firmly at Thomas Sandgaard’s feet. Will he make a third time lucky appointment after Adkins and Jackson? Meanwhile the out of contract senior pros are left in limbo and our summer recruitment plans rely first and foremost on the data analysis skills of the owner’s son. Right now the stability we have long been seeking at this football club feels about as distant as the Premier League.