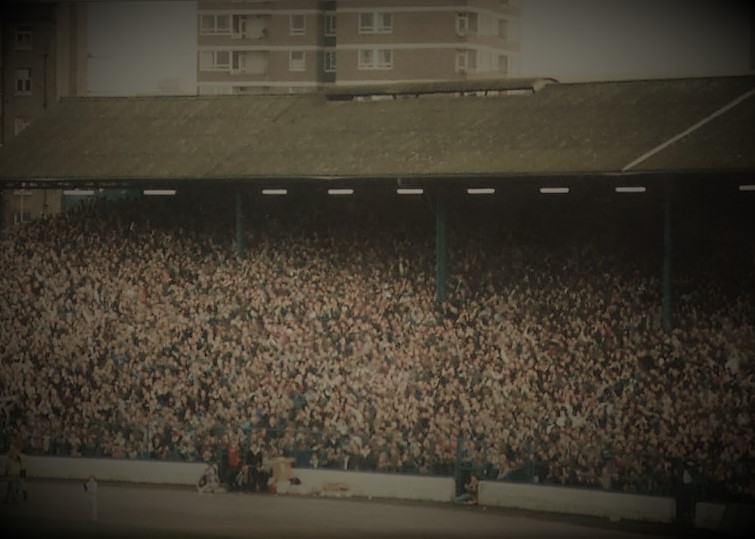 An unusual girl’s eye view of a Christmas-time match in the 1970s. The atmosphere was less than festive at football back then. Article published in issue four of the new Charlton Athletic fanzine, Mod Mag.

I’ve confessed elsewhere that my first memory of – and enchantment with – the so-called beautiful game was the Chelsea v Leeds 1970 FA Cup Final replay – notorious in football history as one of the dirtiest ever matches. This tiny tot watching it on our spindly black and white TV was captivated. But it was a school night so Dad sent me to bed long before the end. My revenge the next morning was to choose winners Chelsea as my team. It took Dad several years to recover from this mistake. Repeated trips to The Valley, a shiny new gold Cortina and natural aversion to being a glory-hunter finally did the trick: I proclaimed myself an Addick.

After that, I barely kept an eye on the fortunes of the Chelsea boys in blue. The mighty had fallen – clearly missing my support – and been relegated. This meant my ex was about to confront the new love of my life in the second division. At Stamford Bridge. On the day after Boxing Day 1975.

My big sister’s partner, Charles, a tall, dark, handsome Aberdonian and Met detective, offered to accompany us to the match, claiming his own allegiance to the home team. Dad and I meekly followed as he led us to the stadium, through the turnstiles and straight into The Shed, the heart of Chelsea fanaticism.

Whether out of mischief at wanting to test whether I still harboured feelings for my original choice of club, or simply because he didn’t know any better (he was not a regular football go-er) Charles found us a place right in the thick of the Chelsea hooligan mob. This was exciting stuff. After all, I was in the company of two big, strong Scotsmen in Charles and my Dad. One of them probably had handcuffs and a truncheon hidden about his person, while the other would defend every tiny, wavy hair on his daughter’s head.

“I guess we’d better keep very quiet when we score, Dad,” I whispered into his ear, stretching up on tiptoe. “Chance will be a fine thing,” he muttered under his breath, as he pulled me round to position me safely right in front of him, tightly gripping my shoulders. I prized up his fingers and shrugged off his hands. “I can’t jump up to see if you do that, Dad.”

Dad and I exchanged a complicit glance and glowered back at him. Strangers of motley shapes and sizes, but mainly wearing leather jackets, denims and Doc Marten boots, nodded back at this imposing character. “Yeah, no bother against this lot,” seemed to be the general opinion. Then the chanting, shouting and swearing started along with the match.

When you are interloping at football you always worry about revealing yourself by the natural reaction of cheering when your own team scores. But that is not the real giveaway. The big clue for opposing fans is your lack of reaction when their side hits the net. Except they probably won’t notice, carried away with the elation of the moment, too busy jumping up and down, whirling round on the packed terracing, hugging their mates and starting up the next chant, oblivious to their statuesque neighbour. That’s the only explanation I can find for how Dad and I got away unscathed that day in The Shed as the goals flew in.

Chelsea relentlessly attacked right in front of us in the second half. We were clinging on for a 2-2 draw, a very respectable result, some nice symmetry between my original choice and my current passion and probably a point more than Charlton rightfully deserved. But football is not always a fair game. A long punt from the Charlton goalie away from The Shed. Finally the ball was in the Chelsea half. I craned to follow as one lone Charlton striker ambled after it. Two towering Chelsea players, goalie Peter Bonetti and centre half Eddie McCreadie, zoomed in, pincer-like. And collided. The ball ran free, leaving Derek Hales with the Chelsea goal at his mercy. Killer struck. Silence enveloped The Shed. Dad grabbed my hand and shook it for joy, without raising it above my elbow, so nothing would be seen. I bit my tongue, dug my nails into my other hand and trod one foot on top of the other to prevent any louder outburst or physical expression of support for the wrong team. My heart thumped in my chest aa I gulped in the stale smoke and cold air of the enemy’s Shed, only uttering a muffled gurgle.

Charlton had defied all logic and quietly triumphed over Chelsea once again in my early footballing life. And somehow I lived to tell the tale.

5 thoughts on “Battle of The Bridge”