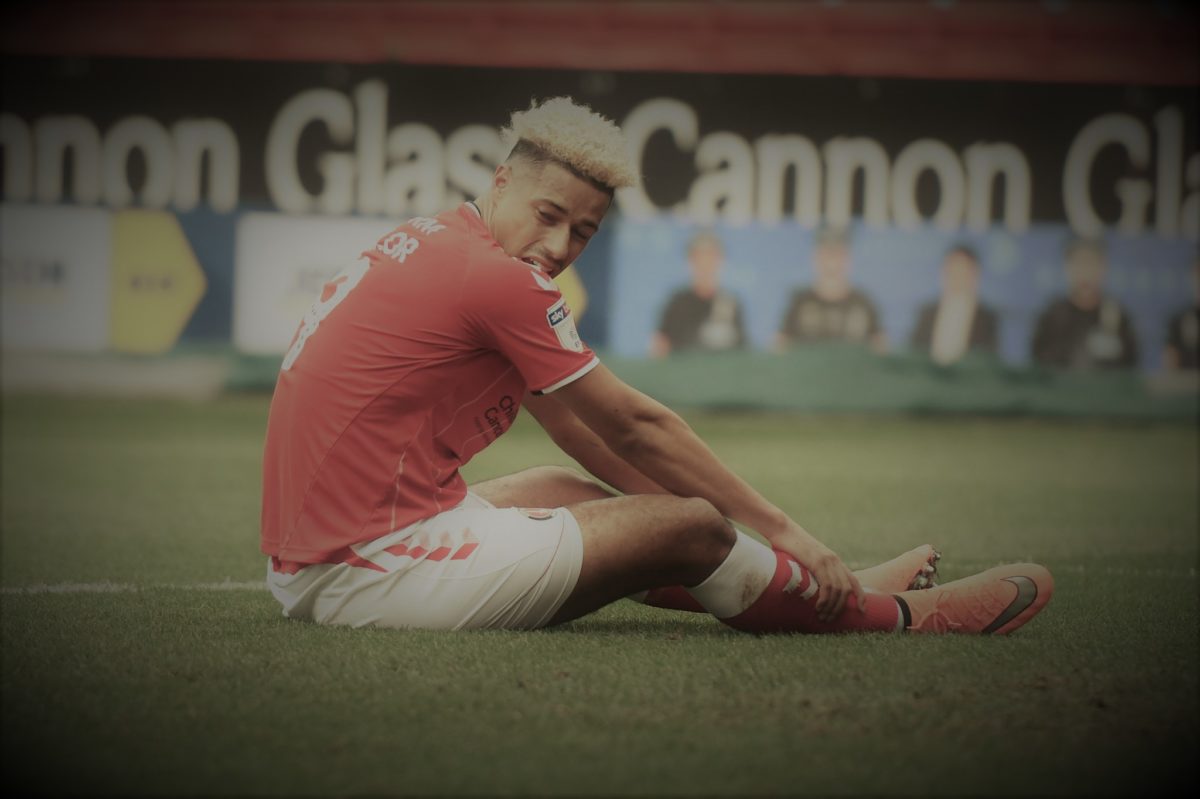 My AFC Wimbledon mates tried to warn me. “He’s a bit big-headed,” they said. “I quite like his hair-style with all those curls piled up on top,” I replied at a tangent, “especially when he dyes it pink to raise money for breast cancer charities.”

“He’s not that good in the air,” they said. I laughed and pointed to his fantastic headed goals for us. “He’s not a team player,” they continued. “Oh rubbish – he’s our talisman and the other players clearly love him!” I boasted. “He got the best out of Karlan Grant. He’s really supported loads of our young players.”

“He’s overly fond of back-heels, mostly unsuccessful,” one of them retorted, starting to sound a little bitter and desperate.

I Tweeted that remark after penning an article called “The Meaning of Lyle” for the away guest page in the Dons’ programme last season. Taylor himself picked up on it and responded via the social medium, indignant at the “mostly unsuccessful” description. I challenged him to prove my mate wrong and score a back-heel goal. He publicly accepted.

It was approaching the end of last season. I’d booked the trip back to Floyd Road from my home in Scotland for the last game v Rochdale. “Why are we going to all this expense and effort for a meaningless match?” enquired my husband. I had no answer, other than the 45-year-old habit of always attending the final fixture. “But it’s not going to be the last match of the season, now, is it?” He said. “We’re already in the play-offs.” Hmmm. Fair point.

Lyle Taylor – I assume in vicarious response to my challenge – came to the rescue and lifted that match out of the ordinary. I watched on incredulously from the front row of the North Upper as Charlton player after Charlton player attempted a back-heel pass, a back-heel flick, a back-heel shot. I swear I counted eight or ten. None by Taylor and most of them unsuccessful. I felt my cheeks reddening as the minutes went past. Never had I expected to influence on-pitch shenanigans in such a way. Thank heavens we won 4-0 and grabbed third place or Bowyer would be after me.

Taylor eventually came good himself on the challenge – with a deft flick of the heel following a corner to secure victory in our first match of this season away at Blackburn.

Even a week ago I was still defending Lyle to my Wimbledon mates: “Yes, he’s out of contract, and Charlton have mucked him about over a new one. We know he’s off. He deserves his last chance at a big payday. He’s been brilliant for us. We wouldn’t be at the bottom of the table if he hadn’t got injured playing for Montserrat and missed a dozen or so games. And he really gets it – he’s been quite outspoken about the craziness behind the scenes and I think he genuinely feels for the fans.”

I was elated when I saw the restart photos of socially-distanced training, with Lyle in the thick of it, looking as fit and lively as ever. Then Bowyer spoke. And now we know. Lyle will not wear the Addicks shirt again. He fears an injury may thwart that lucrative move. Like Scott Parker before him, he has plunged from hero to zero in one petulant moment. Curbishley has admitted that the departure of Parker was the beginning of the end of his Charlton managerial reign. Let’s hope Bowyer does not feel quite so betrayed by his star striker – the one who was a bit disruptive in the dressing room, not very good in the air and pretty useless at back-flicks until Lee and his coaches got hold of him.

I’ve been a football fan and indeed a Charlton fan for more than long enough to realise that footballers have short careers, have to be selfish battlers and mostly think very differently from fans. They wouldn’t survive long on the pitch otherwise.

But each to their own. At the close of last season another stalwart of recent years was about to leave. He’d not been offered a contract reflective of his talents. Indeed, he had been honest that he would be moving on. Yet he strode onto the Valley pitch for the Doncaster home play-off semi-final just hours after his wife gave birth. And six seconds from the final whistle at Wembley, he cemented his legendary status. Like a true Addick fan, Patrick Bauer confesses that he must have watched that goal a thousand times. He will never forget that moment and neither will we. 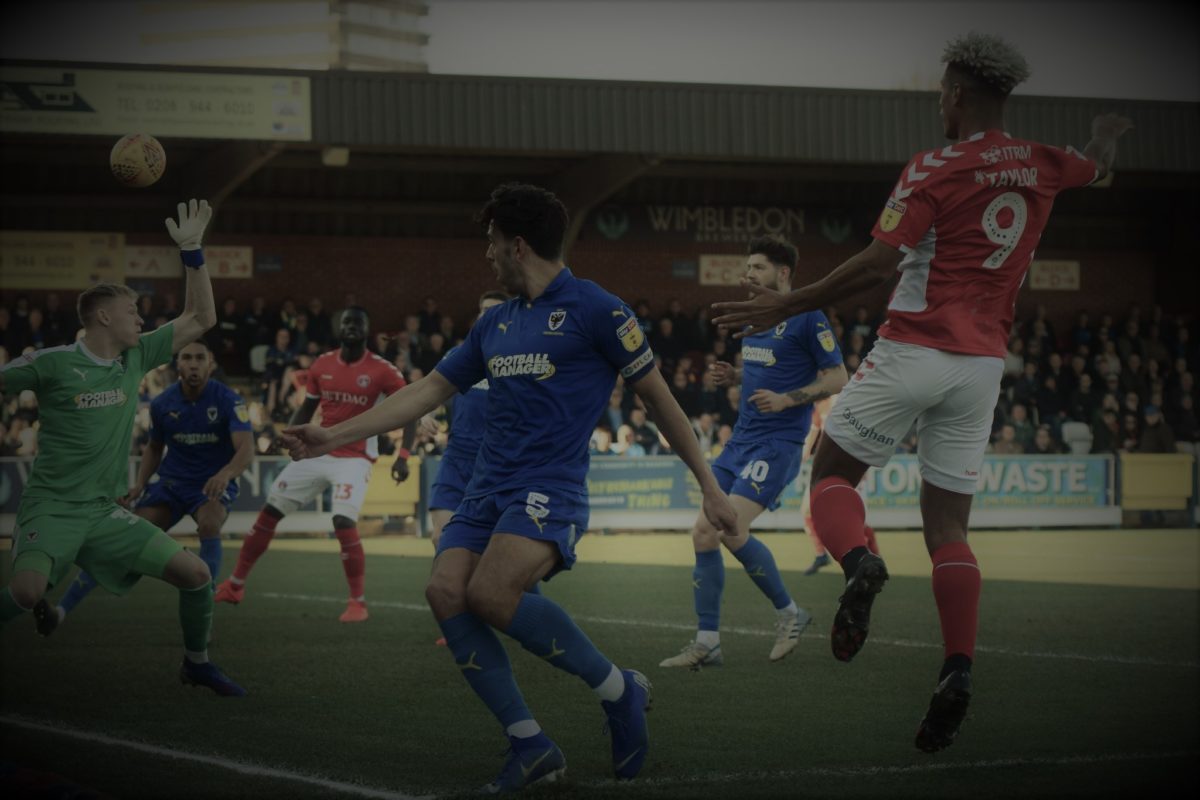 Thanks to an introduction from my good friend, Nick, I have written the away fans’ page, The Other View, three times in recent years when Charlton played at AFC Wimbledon. This one from February 2019 focussed on Lyle Taylor. The Addicks won 2-1 courtesy of a Naby Sarr free-kick and Igor Vetokele injury-time winner.

Lyle Taylor’s arrival at Charlton in the summer from AFC Wimbledon was quite an understated affair: a free transfer of a well-travelled footballer who had shown flashes of prowess in the lower leagues and in Scotland. It’s been twelve long years since Charlton fell from the Premier League but fans still cling nostalgically to memories of the likes of Darren Bent and Paulo di Canio leading the front-line. We were not overly-excited.

My Dons mates were more agitated about the move. “He’s quite a character, but some say he can be disruptive,” was the report from one. “He scores goals which is what any club wants. A few caveats: He really cannot head a ball. He also tends to do backheels (often unnecessary and only occasionally successful). But we’d rather have kept him and he will be an asset to the Addicks,” reported my friend Nick, clearly a wannabe scout.

What none of us foresaw was the creation of the G&T partnership. Loaned to Crawley from January 2018, Academy prospect Karlan Ahearne-Grant was finding his confidence and his professional shooting boots with nine goals in 15 appearances. He returned to the Addicks for pre-season, dropping the shackles of his double-barrelled name.

Love at first strike between Grant and Taylor delivered four goals in the first three matches as Bowyer’s Charlton started this season brightly. They brought out the best in each other, with Taylor’s physical presence, close control and trickery cleverly creating space for Grant’s bursts of pace. They vied for the leading scorer spot, trading assists and running defences ragged.

We started to discover there was much more to Lyle than his on-pitch persona. In October he died his curly mop of hair pink and wore matching boots to raise awareness and money for breast cancer. He spoke eloquently about the cause. Within a very short time, Addicks fans had taken him to heart, even mentioning him in the same sentence as our last striking talisman, Yann Kermorgant. What’s more, he was proving to be very good in the air and I can’t remember a single backheel – sorry, Nick! Scoring at The Valley against AFC Wimbledon, ever respectful, he barely celebrated. Most magnanimously of all, with Charlton winning 2-0 away at Shrewsbury and his partner having missed three one-on-ones, he held out the ball for Grant to take a late penalty kick. The youngster scored and social media lit-up with praise for Taylor’s selfless act.

But all good things come to an early end at Duchâtelet’s Charlton. With January transfer rumours swirling around the front duo, we took on Accrington in a feisty affair at The Valley. Late on, Taylor backed into the keeper at a corner, both men landing on the floor. As Taylor struggled to get up, he flicked a leg – not unlike Beckham at Simeone. Despite kicks and stamps raining in from Accrington, Taylor saw red. The drama wasn’t over, though, as an injury-time penalty coolly converted by a confident Grant led to raucous scenes.

That moment of high emotion was the end of G&T. Grant, sold for £1.5M, departed for bright lights and late sub appearances at Premier League (for now) Huddersfield. The lack of an adequate replacement led Taylor to speak out in the local press about the “dark cloud” of an owner who doesn’t care hanging over The Valley.

On return from suspension last week, the Montserrat international cut a frustrated and rather petulant lone figure, picking up his ninth league booking. Charlton are struggling with just one goal and three points from the last four matches. The going has got tough for both the Addicks and our number nine. He’s after his thirteenth league goal today. I hope it’s his lucky number.