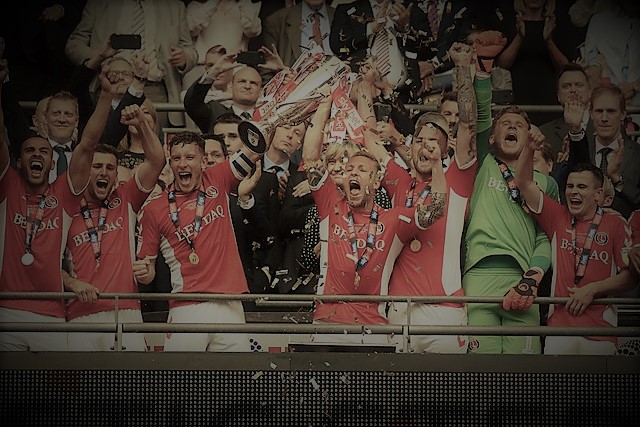 21 years after the first highly memorable Charlton Sunderland Wembley Playoff final, could the repeat live up to its billing?

Sunday mid-morning and we’d just arrived at the swanky riverside hotel in North Greenwich, a play-off final treat. Not much sign of a football crowd here, though. The previous-night’s trendy concert-goers straggled along the pavement outside, mainly younger females eager for a parting glimpse of The Vamps. Fortunately we were able to check-in early, enabling a quick change before we’d fall in with the ranks of Addicks aboard the Jubilee Line all the way to Wembley.

Keen to reveal the view from our eighth floor room, I pulled apart the voile curtains to gaze at the murky Thames, tracing its silver ribbon from the gleaming, crane-embraced towers of Canary Wharf all the way to the distant domes, spires and ship’s rigging of old Greenwich. Then a large black and white bird swooped past. A magpie. One for sorrow. I reminded myself that today was not a day for superstition. Bowyer is a winner. He wouldn’t have any truck with such nonsense. I watched the solitary bird hopping around on a low roof below. Suddenly in flew a second. Two for joy.

I quickly pulled the flimsy curtains back together, preserving the tableau of the pair of birds. I donned my 1998 souvenir t-shirt – red, with a square green diagram on the front illustrating the build-up to Mendonca’s hat-trick goal, counter-balanced with a table on the back showing the times and names of the goal- and penalty-scorers on that momentous day. By coincidence we’d been through the highs, lows and ultimate peak of another four-all-with-added-penalties-victory over Doncaster in this year’s semi-final. The box marked “Play-off drama props for Charlton Athletic” tucked away in the corner of the attic of the football gods must surely be pretty empty by now, I mused. Then quickly cautioned myself that such football gods would have no place in Bow’s brave new Charlton world either.

I pulled on my old red MESH shirt, quickly washed and ironed since the Doncaster home leg. The style had been big and baggy back in those days, so even with an extra t-shirt layer underneath, it just about covered the rather tangible and flabby sins of the 21 years that had since elapsed.

My mind drifted back to the very first match of this League One season and more Magpies, that time of the Geordie kind. We’d stayed over in Newcastle with our good friends who had tagged along as a family of four to take their place with us in the upper echelons of the Stadium of Light. The teenage son had even worn his Newcastle United shirt under his hoodie, covertly infiltrating enemy territory. They had been just as gutted as surrounding Addicks when Sunderland stole the three points in the final seconds. Jason Pearce had hobbled off, leaving us exposed in the penalty area right down below us. Already mourning the loss to injury of Forster-Caskey, we thought a torrid season stretched ahead for our threadbare squad.

But with Bowyer at the helm, obstacles are mere challenges to overcome. Naby stepped up to form a solid pairing with Bauer. Youth burst onto the scene in the shapes of Dijksteel, Morgan, Lapslie and Stevenson. Ben Reeves, Jamie Ward, Mark Marshall, Tarique Fosu all played their bit parts. Villa abruptly hoicking Jed Steer away only resulted in Dillon’s coming of goalkeeping age. The left back hole was eventually properly filled by steady Ben Purrington. Once-maligned loan signings turned golden in Cullen and Bielik. Even the tremor of top-scoring Grant’s departure did not deliver an earthquake, with Taylor manfully holding the striking line together, supported by flashes of the old Igor and the endeavours of Josh Parker. Solly puffed out his chest. Pratley provided the steel so that Jonny Williams could dance and torment. Aribo delighted with a silky combination of power and grace. After a shaky turn of the year, the Addicks’ momentum built as others started to toil.

Our group gathered at the same Wembley Park curry-house three out of the eight of us had frequented in 1998. No, no, not superstition – merely a relaxing and enjoyable way to calm nerves. We couldn’t quite get the band back together – my dad and our football friend, Michael, had passed on, my brother could not be lured back from the Scottish Highlands while others had returned to their first-love teams. In the intervening years we’d made new Charlton buddies, who enthusiastically tucked in to the Spice-of-India fare. I doled out the match tickets. No-one passed comment on the fact that we were in row 13.

Time for Wembley. The symmetry was there but no-one dared predict. The last match of the League One season in front of the Sky cameras would provide the mirror finish to the televised first. We’d enjoy the odd throwback to 1998 for fate’s sake as Ben Purrington stepped into Richard Rufus’ debut senior goal boots. And this time round Jason Pearce would be there to make his presence felt in the penalty box in those final seconds. The Big Frigging German chose his moment.

Cometh the hour (or the 94th minute), cometh Patrick Bauer.

As we cheered the final whistle, my phone buzzed with congratulatory messages from absent, thrilled Magpies. It reminded me of the feathered ones I’d seen outside the hotel window. Coincidence or otherwise, they did predict the script: first, the deep despair of that harrowing moment after five minutes when all Addicks thought sorrow was descending. Then the equally sudden jubilation as Bauer’s prodded rebound deflected into the side-netting below us unleashing an eruption of frantic emotions – five years of pent-up agonising replaced with yells, hugs, bounces and bruises as we realised it was game over.

Now my focus switched to Red, Red, Robins as our Addicks clambered their weary but elated way up the Wembley steps. Cheer up, the sun is red. Whether thanks to fate, history repeating itself, magpies, football gods, Addicks in the heavens or quite simply superb management by Lee Bowyer and all of his team, we’d done it.

We’re Charlton Athletic. We’re on our way up.